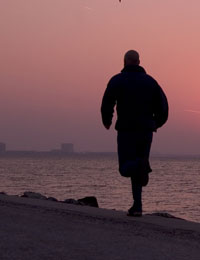 This evening I went for a run… in the dark. I had been out walking several times around the lake close to our house and I figured that if I simply stayed at the edge of the lake I would find my way home – this is a good rule of thumb (except when you haven’t looked at the map and ascertained the size of the lake). After about 45 minutes of running, the path I was on came to and end and in order to stay alongside the lake I had to clamber across some sandy banks and climb a couple of small fences. As I continued around the lake, not finding anything familiar, I wondered at what point it would be wise to turn back – but two things stopped me from doing it, (i) I had covered some difficult terrain and obstacles and didn’t want to risk my luck on them a second time and (ii) I was convinced that I was more than half-way and that turning back would be an error.

The above is much the way that consumers operate in the market today, always pushing forward, but in the majority of cases, blindly making decisions based on gut feeling and hope of a certain outcome. These decisions are made on rules of thumb, on past experiences, and much like my outing, hearsay (a colleague had been for a nice bike ride around the lakes). They are desperate for simple, clear information that tells them where they are, and where they are going (think about the trunk test for websites).

Finally I came across a gentleman emptying groceries from his car and I gingerly approached to ask him which number ‘Meadows’ I was in (for the non-Dubai residents, Springs and Meadows are numbered compounds), where he surprisingly replied that I was now in Emirates Hills. This shocked me for a moment as this is somewhere that I know is even quite a drive away. But he pointed me forward saying that I ‘wasn’t far’ from Springs. Again in Dubai, nothing is far when you are driving, but when you’ve been running for 90 minutes your average speed starts to lag a little. After another 30 minutes and asking for my location one more time, I made it back to a main road and walked the last 15 minutes home.

But this experience taught me a few things, one never to go out without looking at the map, but also how consumers feel in the world today – they are more or less running in the dark. Our lives are getting faster and faster leaving us no time to completely understand what is around us, and much as we see messages on a continuous basis we are always looking for a signpost that will help us with our current wants and needs. So to make communication that cuts through the clutter, and lights up in the dark, we need to think about simple direct messages that answer a problem when the consumer comes across them – not before or after, but right there and then, relevance and context has never been as important as it is today.

As for me, the night’s excursion has taken it out of me and I’m hitting the sack!