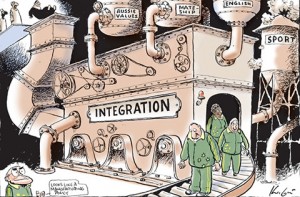 In the rush to evolve the skills of the advertising industry to keep up with an ever changing number of new media channels the buzzword for the last few years has been integration, bringing other skillsets and sometimes other agencies into the fold to deliver an integrated product – whether this was branding, digital or even media. But I would argue that this approach and potentially the meaning that we are giving to the word integration is driving us in the wrong direction, potentially to very short term quick fix solutions but that are not attacking the core of the issue.

If we take a step back and look globally at the M&A market, the successes and failures and above all the reasons why, we quickly see the major reasons for acquisitions tend to circle around products and technologies: Google quickly laps up new technologies that could either pose a threat or boulster their existing products; HP bought out Compaq to remove them from the market and fill gaps in their product portfolio; Glaxo and Smithkline in a highly competitive market are safer together as they amount more drug patents and build barriers to entry; but it is much harder to find examples in the professional services sector because the product itself lies within the people, and the benefits that can be gained from mergers (be they revenue sources in the form of patents, technologies or products) in other sectors are harder to implement in a serviced (and hence people) based industry.

In advertising there is potentially a misconception that many agencies were formed by mergers because their acronyms spell out the names of founders – but these were partnerships rather than acquisitions, and in the days when these gentlemen (as they tended to be) came together it was these individuals who built the business between them. In this day of multinationals, networks, and publicly traded companies we are in a very difficult situation and so I ask myself whether a merger, or acquisition, in the industry can work, under what circumstances and to what end? And above all whether in our quest for integration, this is the right approach to take?

If integration is about evolving the product, then this clearly means evolving the skillset so we need to look more closely at how the advertising product is delivered and what sort of professional it needs. The business is about ideas, it has (thankfully) always been about ideas, creative ideas that are executed in communications media but about good ideas nonetheless – and these ideas tend to come from a group or a single individual who understands the challenges faced by a business and comes up with a new and unique way of looking at the problem – the creative guy(s). As our business has evolved and we start to need digital, interactive and social as part of these executions, it does not seem logical to say that we can simply bolt on the solution after someone has come up with the idea – it seems to me that this is something like saying that cars now need double fridge-freezers and since we have already designed the car we might as well stick it on the roof (that is clearly going to cause some problems not only in aerodynamics and usability but also simply when going under bridges).

But this is what the majority of agencies are doing today. I need branding and digital and activation and some other latest technology, so either I can buy a company and bring them in house, or employ one or two experts and set them up in a corner office to service all the clients of the agency – there is both an organisational and a scaling problem here. The product of the agency will not become integrated without evolving, and this evolution needs to take place from the embryo of the product itself which is the idea and so the skillset that needs to be introduced needs to be dropped in right there – to the individual or the team that is creating the initial idea. So we must tackle both the organisational and the scale problem, and if we approach this through acquisition, we need to properly evaluate the NPV of dealing with our own issues along with purchasing an outside entity.

JWT New York is the jewel in the crown of the agency network, the hub of one of the oldest agencies in the world and a powerhouse of creative thought; but as with much of the industry it was beginning to be thought of as a 30-second spot machine and hence risked being outdated. This is not to say that there weren’t a few key clients making a difference – the work on Jet Blue is seen as award winning and highly creative at an integrated level – but this model was not sustainable and did not potentially generate the necessary margins to use the model across all clients.

Within the JWT Group there were a number of other agencies including RMG Connect which had been the combination of different specialist marketing services groups across the globe and in the US a strong skill-base of direct, interactive and analytics clients and technologies. The services of RMG were being sold more and more to newly ‘integrated’ clients and hence cross-agency teams were being developed for these clients with the small distinction (and burden) of different reporting lines and P&Ls.

On January 1st 2010, RMG Connect ceased to exist and overnight all the employees became employees of JWT – apart from a few changes in management this didn’t alter too much since clients that were shared now had only one provider and those that were directly RMG continued to be served by their existing teams. What it did mean over the months that followed, were that certain roles were potential duplicates leading to cost efficiencies for the agency and also for certain clients where process might well have involved two contact points or two project managers which could be combined. For the agency overall it meant the opportunity to shift headcount into one organisation and therefore increasing the talent pool overnight. So now when a new client might need a specific analytical or digital skillset the agency doesn’t need to look outside (even if only a chinese wall) the organisation to be able to service that need. This integration worked (and is working) because the teams were already part of the same family, worked in the same building and to a certain extent had the same clients – the objective and result was more one of financial clean-up and efficiencies and the by-product over time is the evolution of the agency as osmosis is allowed to take place by bringing in resources for future business.

And this appears to be a great solution – agencies may well be concerned about their changing market, but this doesn’t mean that they need to change overnight, after all they can only go as fast as their clients and if the clients haven’t moved on it probably means that they are more or less happy with the product and service they are getting – maybe our anxiety is trying to make us run before we can walk?

In mid 2010, JWT announced the acquisition of a pure-play digital agency called Digitaria based in San Diego – but with the assertion that they would not be integrating the staff or changing the name but using key people to guide the cross-fertilisation of skillsets between the two agencies. The Californian agency of 100-people would use the scale of JWT to expand their operations to New York but continue with their existing clients.

These two steps are a great insight into the way that agencies can approach integration and why some opportunties are right for complete change, and others are simply putting themselves on the path for more Darwinian evolution. We do not have a perfect crystal ball, but the situation begs the question of what the outcome of another scenario might have been. If RMG had either not existed, or not wanted to merge, and if JWT had decided to integrate the Digitaria offering into their own how would it have worked out?

From a purely geographical standpoint it would mean a great deal of NYC-LA travelling to create two homogenised JWT offerings on the East and West coasts; Would the result have been an improved overall product for JWT? More than likely since the Digitaria offering complements the advertising product very well. Would employees be happy and efficient? Since this would invovle changes for employees on both sides, there is no doubt that a cross-country move would be a great opportunity for some, but depending on their demographics this could potentially be a costly exploit to relocate what might be up to 50 employees and their families. Would the clients be happy? Here there is a question mark in that clients would no doubt have access to a larger skillset, but Digitaria clients may not need or want these additional services (nor for that matter all the advertising clients) and what the cost evolution would look like as some moved from a one-shop CA based operation to a multi-national Madison Avenue based agency.

So it looks like this two step approach has put JWT en route to a new future – staying up to date for today and putting a few extra backup guys in their rear pocket for the next evolution in the market that might be just around the corner – integration isn’t a dirty word, but we need to understand what and how we do it.