End of a great first day at BDW’s Making Digital Work at the Art Director’s Club in NY. It would be difficult to give a full recap of all the day’s speakers and insights, but a few choice elements that stuck in my mind from the day:

We began with an intro from Edward Boches (@EdwardBoches), Chief Innovation Officer at Mullen. His slides are below, but this was an overall intro into the different elements we would cover over the two days, the how and the why.

How the models we are working with have changed, and the traditional way of delivering on the communications product are no longer valid – that companies are catching up and overtaking the agencies, sometimes going straight to clients with their own products and pushing the agency right out of the loop – that user experience and engagement are the new art & copy, an that we need a new brief to make the work good – every piece of work needs to be interactive, participatory, shareable and useful.

Next, Faris Yakob (@Faris), recently Chief Innovation Officer at MDC Partners and now founder of Spies & Assassins came to talk to us about strategy and planning. He wanted to get us to what post-digital strategy might be, but this relies on the fact that digital is mainstream and working well – and this definitely isn’t the case right now, as stated by Russell Davies in his post digital apology/explanation for coining the phrase. 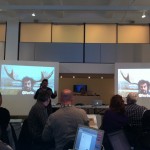 He made the point that the planning model of today is broken, referring to the work of Robert Heath & Paul Feldwick (50 Years using the wrong model of TV advertising) and that research has actually shown that the most effective ads of all are those that have little or no rational content (All Market Research is Wrong). That attitudes most definitely do not dictate behaviours, and if we continue to believe market research telling us this we are en route to disaster.

Faris made us understand that what is key is phatic communication, that unlike traditional media channels, online there is no scarcity of space or time and so our formats are no longer dictated by the medium – and that with the power of the web today online brands are no bigger than people.

He also emphasised the point that as we add digital media to the system, we change the entire system and that for planning to be succesful it must now incorporate media knowledge into the process – it is not enough to be a digital strategist, today the role of the strategic planner is to manage the whole system architecture. And that since people can now create content, creating content is no longer enough, we need ideas that themselves can create even more.

Today as it stands, planning is broken, we need to rebuild it looking both at behaviour and channels to really deliver.

Next up was Matt Howell (@MrHowell), President of Modernista who described to us the changes that the agency has gone through to get to their structure today. Driven by the loss of Cadillac (their largest client) they were forced to reassess the agency, the ways they worked and how they were organised. This big client had dictated a great deal of structure and process, and it’s departure gave them the opportunity to focus and get better ‘at making things’ as their core objective.

This focus on change came first on the work, second on the people and finally on the process. They realised that a great deal had changed and that the product had become less like a game of roulette, focussing on a single win or lose idea, and more like the management of a portfolio of multiple smaller activities.

The first step in their change process happened almost overnight as they removed their interactive silo, changed all job titles that included digital and placed digital at the core of their work. All their new hires need to have hands-on knowledge of interactive and they have no place for the ‘outlier’ pure traditionals anymore, they focus on recruiting T-shaped personalities as the combination of them leads to cognitive empathy and better functioning teams.

The second step was the prioritisation of the creative work by reorganising the teams and the job functions – cutting out the majority of account service which before the change had been almost 25% of the organisation, and recasting people as producers whose focus was on delivering work. They also rearranged the physical environments to bring those working together closer and kept teams to key components only, keeping them small and thereby allowing them to be nimble. This made overall communication and collaboration better, Matt reminded us of emails that are too long and have too many people in copy, that we use as a substitute for collaboration today!

The overall process took almost six months, and was rolled out client by client to ensure that all were comfortable – Matt admitted that it wasn’t a pleasant experience all round and that it created some inefficiencies in the short term, but that they are convince that they are following the right model for the future. He stated that the worst thing they could have done was only take it halfway and commended the Modernista leadership team on their strategic vision and resolve.

Matt finished with the key point that digital is not someone else’s job.

See a recap of the afternoon sessions here.