Don’t get me wrong, I love the iPad, and now even more with the launch of the iPad2. The beautiful touch screen is now even shinier, the camera means I can do some of the fun things that were once relegated to my phone and the thinner form factor means that it feels that much better in my hands. But, it still can’t replace my laptop or my phone – and that means it’s additional weight in my backpack.

So the question is really, is whether that weight has a positive ROI for me, and my back?

It’s probably worth looking at the apps I use:

Flipboard: Far and away the best way to read your Twitter feeds, great organisation and display and really easy to use. I have Facebook and some magazines in there too, but I hardly touch them.

Hootsuite: I’ve moved back and forth between multiple Twitter management apps both on the laptop and the iPad (CoTweet, Hootsuite, Tweetdeck and the official Twitter App), but I find myself coming back to Hootsuite for the iPad as it seems to deliver best on my needs as I manage multiple accounts and sometimes post across and between them.

Gmail app: Between my work emails, and my multiple personal addresses I need some apps that are just simple stand alone. The mail app on the iPad is great, but linked to my office exchange account and I don’t like mixing up the inboxes.

Evernote: Anyone taking notes on the native app is kidding me… No way to synchronise, little organisation, no multimedia and it’s even a pain to copy and paste to an email. Evernote is the answer to this with host of features that work across your phone, desktop and iPad.

Angry Birds: Someone said recently that they don’t know how they got through long trips with their kids before Angry Birds on the iPad, I don’t know about that yet, but I know it works pretty well on my wife right at home!

Of course mail & calendar and a host of others, but they aren’t worth a mention here.

But there are still some things that I find difficult, or that are really missing on the way I need to use the iPad and its apps:

Keyboard: I can’t really live without a real keyboard (probably why I still love my BB Bold and don’t have a Storm or iPhone), the onscreen keyboard is great and works amaizingly well, but there is something about pushing down the keys and keyboard shortcuts that is really missing. Added to this the ‘real’ buttons on the iPad are of course not designed to work with the keyboard so they aren’t positioned ergonomically in that way – I still love my keyboard and mouse but might be willing to opt for keyboard and touchscreen.

Multiple browsers: I’m always in multiple tabs and beyond that multiple accounts across Google and WordPress in particular and this is where I need the power of different browsers or the great incognito function of Google Chrome.

Calling: Calls have become second nature on both my phone (duh!) and laptop, so when Skype only works partially and not in the background this is a real killer for me. I know this is being updated for the camera and iPad2 – I haven’t tried it yet, and I’m not on Facetime either.

Camera on iPad: Finally as I mentioned above the camera is missing for video calls, but when you think about I’m probably not going to be doing much else with the camera than that, one because of the quality but two because the form factor isn’t right for a visit to the zoo…

At the end of the day, iPad, iPad2 – I love you both, and you’ll be a part of my life for a while, but probably for the wrong reasons. I can’t give up my laptop and I definitely can’t be without my phone (and I can’t see myself with an iPad in my rear jeans pocket) so it looks like the relationship can’t and won’t be based on solid stuff, beyond my geek-need for gadgets. 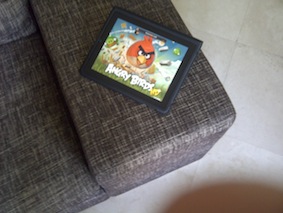 Apple and Steve Jobs have done an amazing job of showing us how to create a new need in the market and delivering on that with excellence, it’s true that the iPad has created a new ‘lean back’ approach to browsing and computing. So yes, the iPad is here to stay, for me though, it’s on the arm of the couch. As Chris Brogan said in a recent podcast, the one thing that the iPad has done, is convince me that I need a Macbook Air!